Travel karma is the bad luck, bad weather, bad room, bad case of Montezuna’s revenge… all the moments that you hope you’ll look back on and laugh about someday. That Jamaica honeymoon your brother booked, and the hotel had a fire? Blame it on travel karma. Our week on Malta in the autumn month that the travel agent swore got only 2-3 days of rain, and we were there for all 5 of them? Oh, yeah. It was travel karma.

There’s nothing you can do except shrug your shoulders, find a comfy café to hang out, and pull out the book you brought along.

Travel karma is other moments, too. It’s serendipity, the magic of being in the right place at the exactly right time. It’s the town festival you stumble into while out exploring. Travel karma is the restaurant with the fixed price menu that turns out to include champagne throughout the meal. It’s when you jump on a train 10 seconds before the doors close to leave.

We booked a charter flight to India. 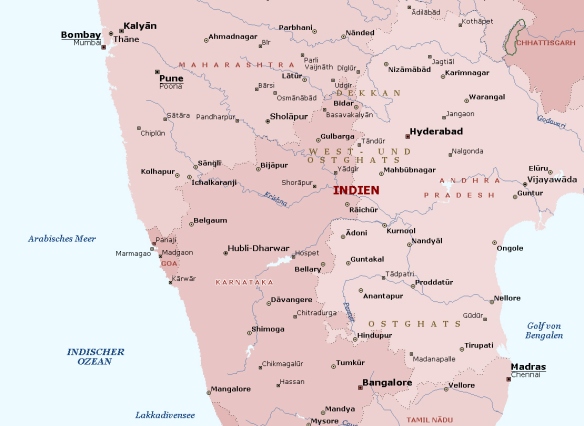 Where we were headed

I don’t always sleep well on the eve of a trip, and slept especially poorly this night. The next morning we were on a very early ICE train to Frankfurt to get our flight to India. The ICE is a sleek, fast train that makes few stops and great time.

I hauled my train pass out of my travel purse out of my day back for the train attendant to check. Tired, I reminded myself that I would need to put the pass back in the purse and the purse back in the day pack.

We got off the train and headed up into the airport. A few horrified minutes later I realized my purse was right where I’d left it, on the seat of a train now heading to Amsterdam… containing my passport. And my credit cards. And my train pass. And $$s. And €€s, all the ready money I was carrying as we weren’t sure how easy it would be to find cash machines.

We could get more cash in the airport and use Uwe’s credit cards, but I wasn’t going anyplace unless I got my passport back. The helpful folks at DB (Deutsches Bahn) contacted the train and they checked: my purse still lay on the seat where I’d left it! The problem was that the next scheduled stop for the ICE wouldn’t be until Köln, several hours up the tracks. DB would hold my purse for me there. There was no way I’d have my passport back in time for us to make our plane.

It was too late to do anything but rebook the flight to India. If I said “Uwe, I’m soooo sorry!” once, I said it 100 times. Man, did I feel awful. But – it was travel karma.

Uwe climbed on the next train heading back to Stuttgart (looking a whole lot less happy than he had early that morning) and I caught a train to Köln. The DB personnel hadn’t been able to report if my purse still contained my valuables. My passport was stamped with the resident alien visa that allowed me to remain in Germany. And without my passport I couldn’t head back to America to see my country, or my family, or go anywhere, for that matter. I felt oddly vulnerable. This situation was bad, and the more I worried about it, the worse it became.

As I sat on the train I bargained with the travel gods: “Just leave me the passport.”

When we reached Köln I realized I hadn’t eaten anything since supper the night before. I wasn’t ready yet for good/bad news about my purse. I bought myself a sandwich and a coffee and stalled for five minutes. Then it was time… I headed to Lost & Found and told someone my story. Of course, I no longer had any ID to prove who I was. He asked me to describe the purse and what was in it.  I flinched inside as I told him.

The nice man vanished into the back and returned with my purse. “Go ahead and check that everything’s there,” he suggested. I know my hands shook as I unzipped it and looked.

Not a pfennig had gone missing. I shrieked Ya-hoo! and he laughed. Then I said thank you and left the little office.

I went directly to the flower vendor kitty-corner to Lost & Found and bought the largest bouquet of white blooms they offered. I marched with the bouquet back into the Lost & Found office. The employees all looked up astonished when they saw me again.

My voice quavered. “These are for all of you. It’s not enough just to say, ‘Thank you for doing your jobs’. It’s so great to know that there are still honest, helpful people in the world!” Nonplussed, they accepted the flowers, but everyone was smiling.

The train trip back to Stuttgart from Köln took 3 hours. The next charter flight to India left 3 days later. When we got finally got there I had one of the most amazing trips of my life. I probably used up a lot of good travel karma on that day I had to journey to Köln, but I hope I’ve added to my karma account since then. And I will never, ever forget my belongings on a train going anywhere. That’s one lesson I’ve learned!

More pictures from India and of Uwe’s photography may be viewed at viewpics.de. 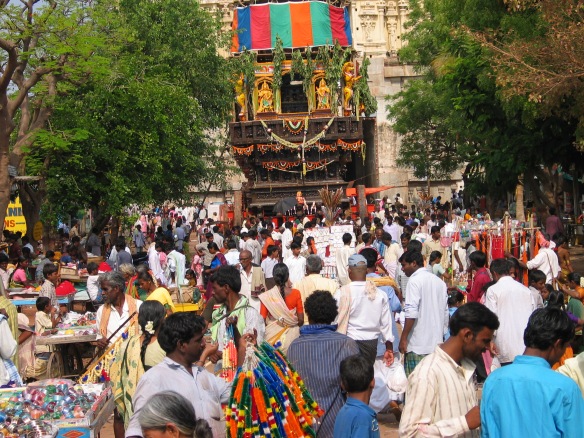 I think I come from a great family. We’re a lively bunch who cook and eat long meals while everyone laughs and carries on rambling, looping conversations. We genuinely love entertaining others and we’re not afraid of being silly. (Just ask Uwe.) You’d like us. Really!

But the thing is, we’re One-Tracks. Get us on a favorite topic and we’ll crank about our passions all night if you let us. If you want to hear about the intimate lives of gypsy moths, my dad is your man! Or to know about the alternate takes of Beach Boys songs, go to my nephew. I love Shakespeare so much, and have done so for so long, that for a few months around the age of 10 I went around saying things like, “Methink my sister Pam doth stink.”

When we get interested in something we happily spend hours, days, weeks and months learning about that subject. We’re thorough. If a Campbell says he or she knows a bit about the topic you innocently mentioned, trust us: we probably do.

The acknowledged One-Track Supreme of the family is Barb. My sister is an artist, working in clay. She loves ceramics. Her husband Javier Cervantes works in ceramics, too. At their house you eat off hand made plates and cups and bowls. Their work or the work of artists they trade with grace the walls and shelves.

What else would potters give other potters for their wedding day?

The garden out back is filled with clay pots and figures. 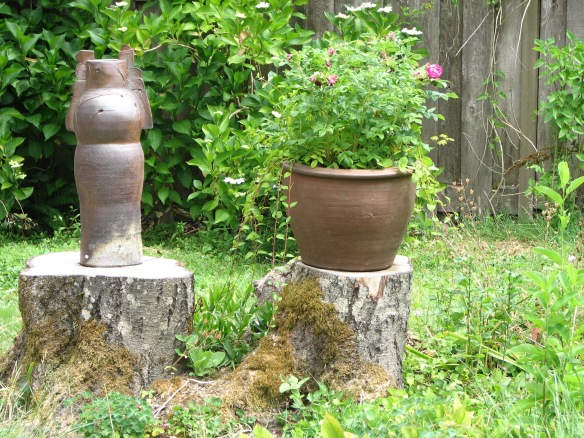 Two kilns occupy the garage (the cars are banished to the  front yard) and Barb had a workshop built in back that doubles as an art gallery.

Barb’s obsession with clay goes way back. As children we made annual camping trips in the Adirondacks. (All the Campbells are crazy about the wilderness, so I guess you could say this is a shared One-Track passion.) We’d load the canoe and head in to a remote spot. Often we only saw other people on the trails in to the back ponds or a boat from afar out on the lake.

Barb spent happy, happy hours forming objects from mud and collecting shells and stones. She fetched long sticks for a makeshift store. In the middle of the biggest state park in the USA, Barb peddled her wares to the Great Outdoors.

She played on the completely isolated shore and waited patiently until one of her sisters walked by. “Want to buy something?” she’d ask. Pam and I rolled our eyes and ignored her. (One-Tracks can be cruel to one another. We know it’s dangerous to encourage the madness.)

Nothing deterred Barb, ever. During those weeks in the woods she was simply training for the life and career she was fated to follow. For decades Barb’s done the artist circuit, traveling around the country to art shows. Her work sells in galleries. She and Javier have joint exhibits.

Over the decades I’ve been her booth assistant. I have an object I bought at the last show where I assisted Barb. I went back several times to admire a walnut and curly bigleaf maple salad bowl. The woodworker told me that it sat on his home kitchen counter top for over a year until he was finally ready to part with it. He said he’d looked at that bowl each day. I love knowing that this piece, used for an utterly utilitaritan purpose, had been the object of his meditations.

The atmosphere at art shows is always fun. They’re usually held on summer and autumn weekends in lovely outdoor settings. You see functional and decorative work from all over the country. You wander through rows filled with art that people poured their hearts and dreams into. You step into booths that contain the creations of others who dare to share their visions.

There is magic in the single-minded passion of craftspeople and artists. It’s not simply desire: it’s a need and compulsion to create. Every artist, regardless of the medium they choose (or that chose them), has allowed a Muse to touch their lives. I can’t draw or paint or throw a pot, but I come away jazzed by the energy of all those artists. One-Tracks, all of them!

Barb’s work can be viewed at http://www.barbcampbellceramics.com

More pictures from the Adirondacks, our trips and of Uwe’s photography may be viewed at viewpics.de.