To see the Mekong Delta on our own by boat proved complicated and required more time than we had. We signed on instead for a tour. We were lucky: only a young couple from Holland had signed up as well.

Travel by boat we did! We took long boats, short boats, boats powered by motors or by human arms. We visited floating markets and stumbled into a tourism promotion festival going on in Chau Doc.

For me the highlight was the festival for Bà Chúa Xứ, the Lady of the Realm on the border to Cambodia. The shrine to Bà Chúa Xứ houses the most important cult in southern Vietnam.

We had the really good luck to visit Bà Chúa Xứ’s temple during the holiest period of the year. Her three-day festival starts at the beginning of the rainy season on the twenty-third day of the fourth lunar month.

The Lady of the Realm protects female entepreneurs (important in a country like Vietnam where women play a major role in small family businesses). Bà Chúa Xứ’s cult has a fascinating belief in both fecundity and the capacity of the goddess to multiply all that she touches — including money.

If you invoke Bà Chúa Xứ’s help, you must make a pilgrimage to thank your benefactress for her assistance. (She is remorseless to those who betray her favor!) Traditionally men need to spend 9 years making an annual pilgrimage, and 7 years are required of women.

In the courtyard before her temple, spirit money is burned in huge vats.

I wanted to make an offering inside the temple and decided to brave the crowds.

I joined the slow moving throngs and we inched our way forward. All around me pilgrims carried tall flowers, 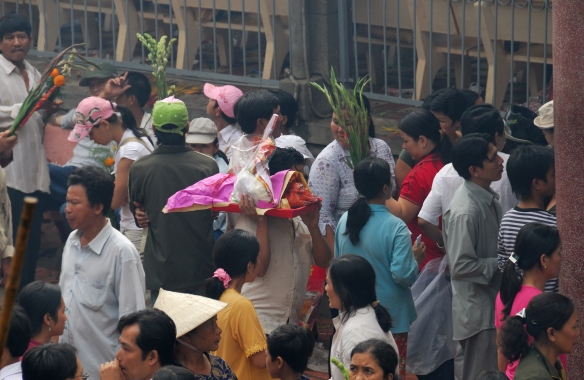 and men bore platters with decorated sacrifices of whole pigs on their shoulders. 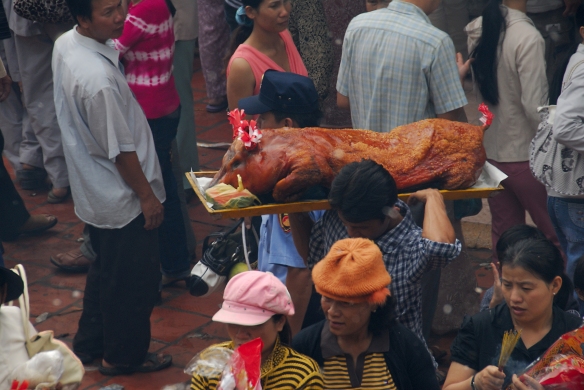 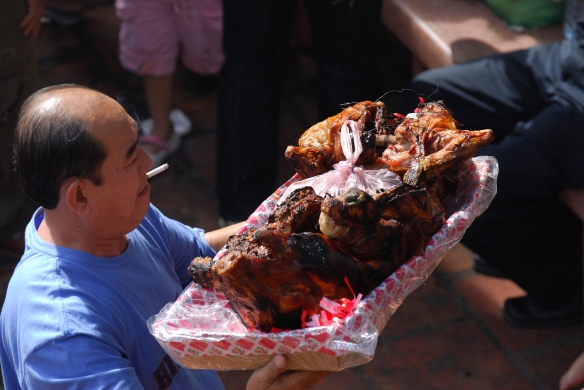 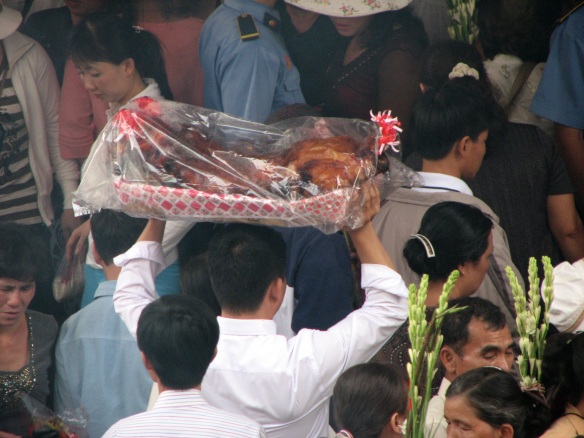 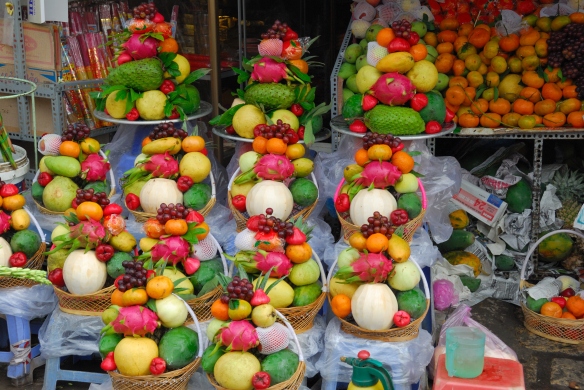 and still others carried lit sticks of incense, held high.

The crowds were so thick that I was concerned someone would set my hair on fire!

Once I was inside the temple I managed to make my way up to Bà Chúa Xứ’s altar. Each day in progressive rituals her image is washed and cleaned. On this day, old women were changing her robes. I was unable to get close enough though, and made my offering later out in the (relatively) less-crowded courtyard.

The goddess originally resided on the top of Sam Mountain; her image is popularly thought to have grown from the stones of the landscape.

from the summit of Sam Mountain, with the temple crowds just below

She wished to be worshipped and caused the locals to move her statue down to Vĩnh Tế village, where her temple still stands today.

I was surprised and moved to realize that her image had mass and strength rather than simple beauty. Some reports state that her statue is a female Shiva (Khmer). Other sources equate her with the queen Thien Y A Na (Cham), the goddess Tin Hau (Chinese), and the Lady Buddha (India). Bà Chúa Xứ is also named The Black Lady, and I see a likeness to Christianity’s Black Madonna.

Bà Chúa Xứ is a powerful deity protecting and bestowing prosperity on her people in the Mekong Delta. In such a fertile area it makes sense to believe in a benevolent, generous goddess.

More pictures from our trips to Vietnam and of Uwe’s photography may be viewed at viewpics.de.