When we talk about salt, we talk most often of sodium chloride. This is NaCl, consisting of the elements sodium and chlorine.

There is a charming tradition in Germany of bringing a loaf of bread and salt to friends when they move into a new home. The saying is that if you have those two items in your house you’ll always survive. Bread and salt are still ceremoniously served to guests in parts of northern and eastern Europe.

Mark Kurlansky writes, “Loyalty and friendship are sealed with salt because its essence does not change. In both Islam and Judaism, salt seals a bargain because it is immutable… In Christianity, salt is associated not only with longevity and permanence but, by extension, wth truth and wisdom. The Catholic Church dispenses not only holy water but holy salt, Sal Sapientia, the salt of wisdom.” [1]

Seeing the hard way salt is won from pits changed forever the way I think about this simple condiment.

We were staying for only a few days in Vientiane, the capitol of Laos, and spent a day with a guide and a driver to see a bit of the area. One of the spots we toured was a traditional salt harvesting town. A little settlement lives at and from the pits (and has burned down numerous times). Each time, they rebuild right next to the pits. 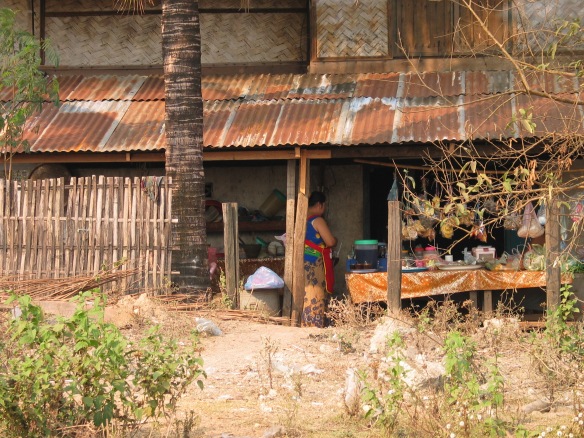 Salty waters are brought up from deep underground

and then boiled in open metal pans. Their burning fires glowed and sent off intense heat. The briny steam that rose felt like being in some strange circle of Dante’s Purgatory. 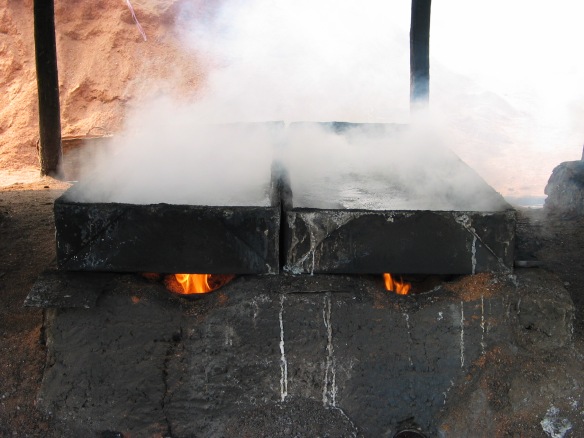 Once the water has boiled away the salt is gathered in baskets, weighed, and stored in a barn. 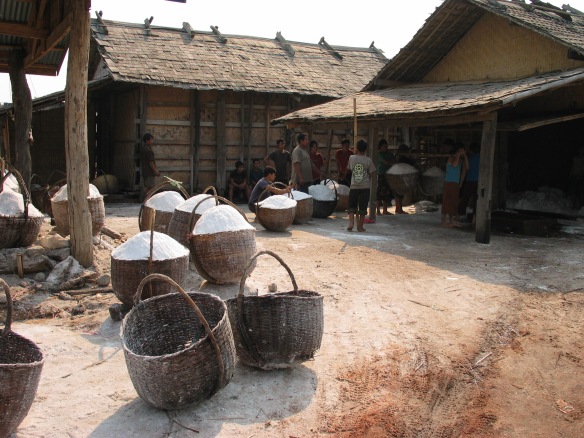 Workers then bag and tag the salt, preparing it for market.

Salt is a serious business. The salt from this mine is sent to the north where people still suffer endemic goiters.

I thought of the pits of hell, of work so demanding and hot that it left scars. Just being tied to a spot like this must bake you and make you hard. Or so I thought. Instead, I met workers doing their jobs in neatly ironed clothing. The women all had on jewelry. A group of little children trailed us everywhere, laughing and mugging as children do. 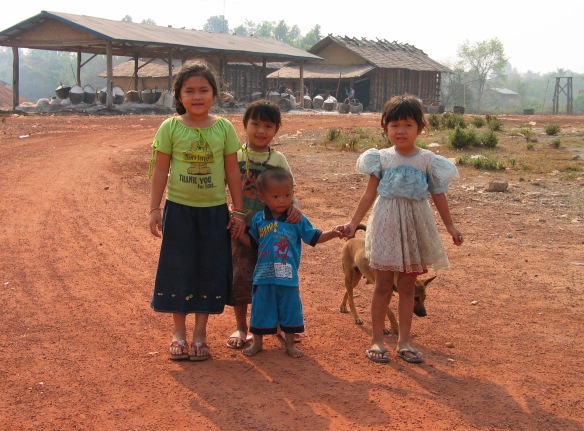 Since that day salt has tasted both sweeter and bitterer, or herber as the Germans say. And in that small word I hear the echo of the coming season, Herbst, Autumn. The summer is burning away and fall is coming. May your harvest tables everywhere include bread and salt.

Uwe’s photos of our trips to Laos and his photography may be viewed at viewpics.de. Go to my earlier posts Despair Is An Exotic Ingredient or A Visit to the Food Bank, Part 1 &  2 for more about food.

24 thoughts on “The Salt Pits”