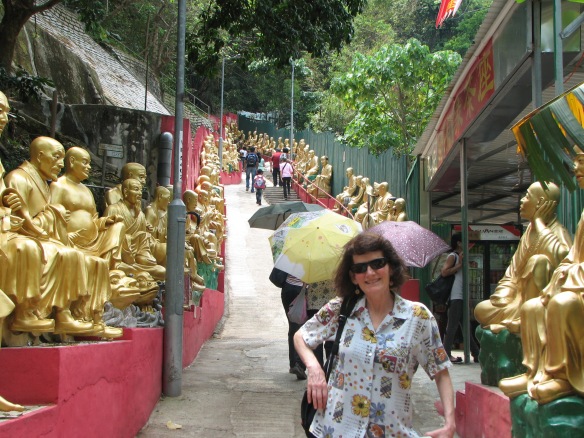 Pam on the path

My sister Pam is a teacher for international schools. For the last three years she’s been located in the Hong Kong area. It’s a great place to visit: the languages are Cantonese and English, the transportation system is so simple that anyone can feel clever using it, and contrasts between modernity and tradition are everywhere you look.

Pam and her family live in the New Territories. This part of China is on the mainland north of Hong Kong. While Hong Kong is the most densely and vertically populated city on the planet, the New Territories are still relatively quiet. The landscape consists of steep, lush jungle peaks that end in bays and inlets. 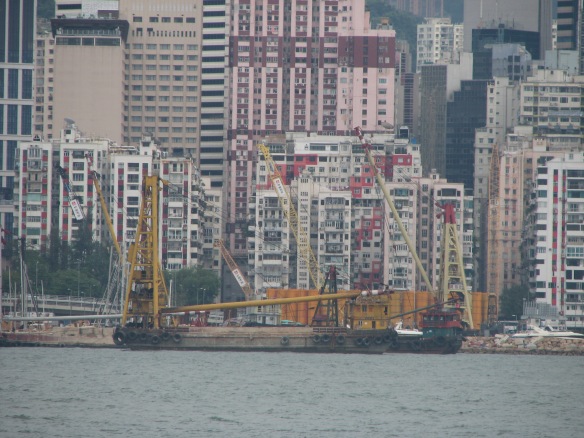 The vertical density of Hong Kong 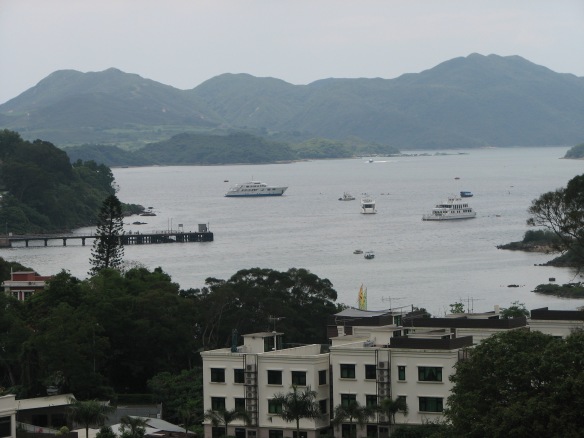 The view from their apartment near Sai Kung

The region is growing, and changing fast. On the bus from the apartment we pass villages on hillsides or tucked into hamlets and harbors. Several floating villages of traditional houseboats are minutes away. And then the high rises suddenly appear, row after row after row. 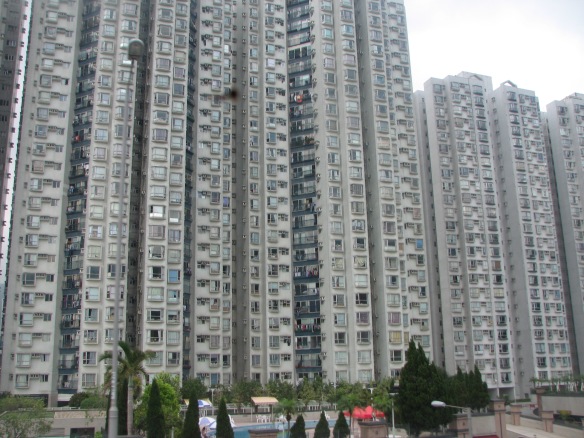 There are lots more that look just like these 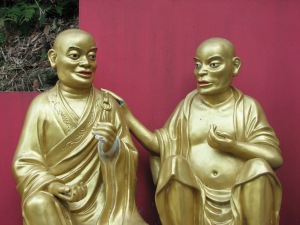 So did you hear the one where the Buddhist monk, the Catholic priest, and the Jewish rabbi enter a temple…

It’s not far to Man Fat Tsz, the Ten Thousand Buddhas Monastery in Sha Tin. It was founded by the devout layman Venerable Yuexi (the Chinese月溪法師; pinyin: yuè xī). Building began in 1949 as Yuexi and his disciples carried everything up from the foot of the mountain. For eighteen years they constructed the buildings – and 12,800 Buddha statues. 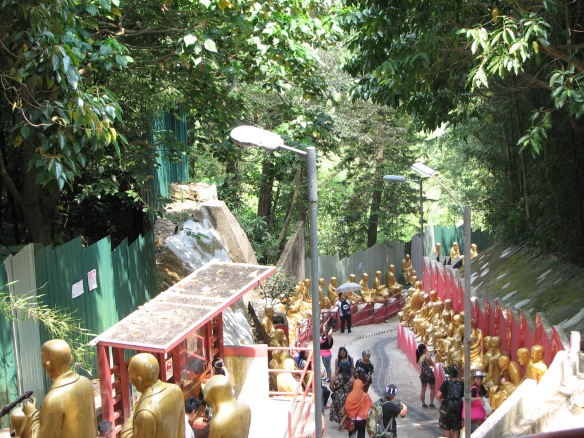 You head up through a bamboo forest and statues line both sides of the path to the monastery. 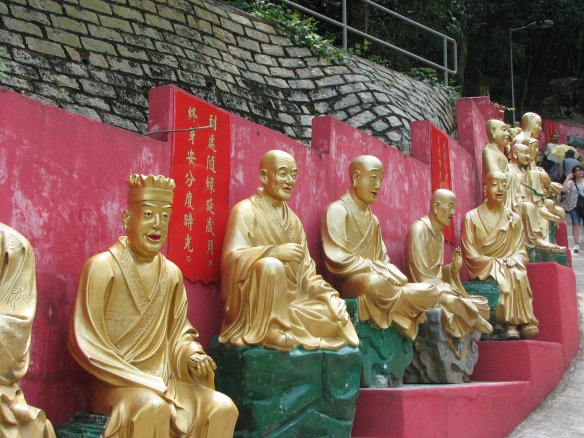 There are roughly 500 Arhan [1] statues in plastic, painted gold. Each one is unique.

Their expressions represent the experience of enlightenment. Other statues await once you reach the summit. (Click on any of the thumbnail photos for a closer look.)

I felt like I was in a tacky Buddhist Disneyland until I got to the top and entered the main temple. Before the altar is a glass case, and it contains Venerable Yuexi’s preserved body! His body (still perfectly intact) was exhumed eight months after his April 24, 1965 death. Yuexi was next embalmed with Chinese lacquer, his head and face covered in gold leaf. The Diamond Indestructible Body of Yuexi’s robed corpse sits in the lotus position. I was oddly moved by his preserved body: with the sight, I had a glimpse of religious truth. [2] 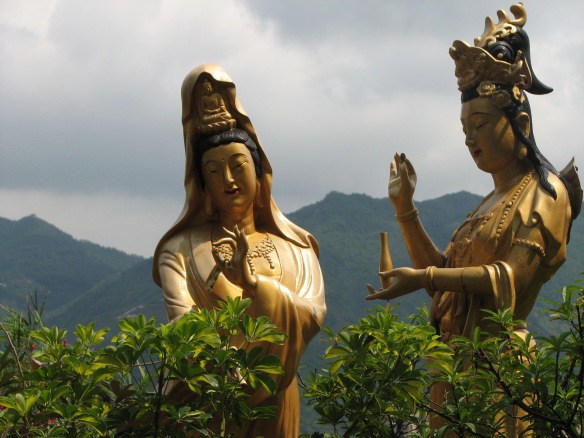 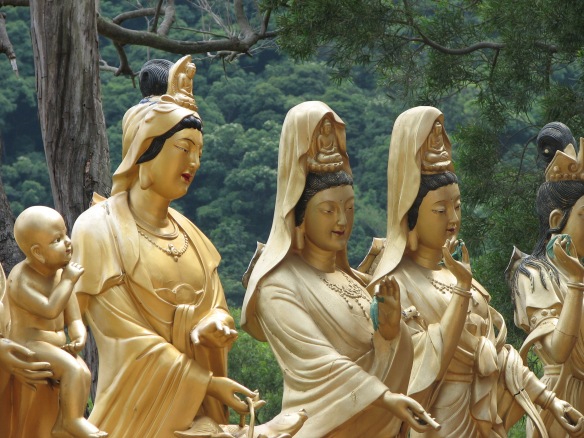 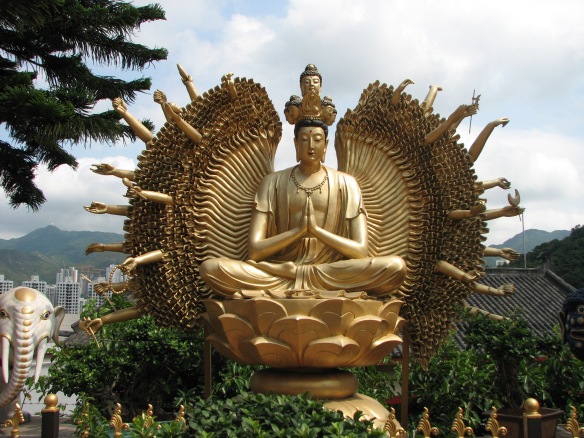 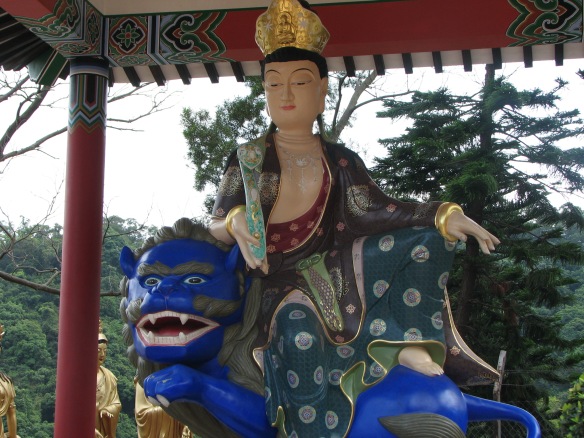 That feeling became surreal as we headed back to the bus stop. 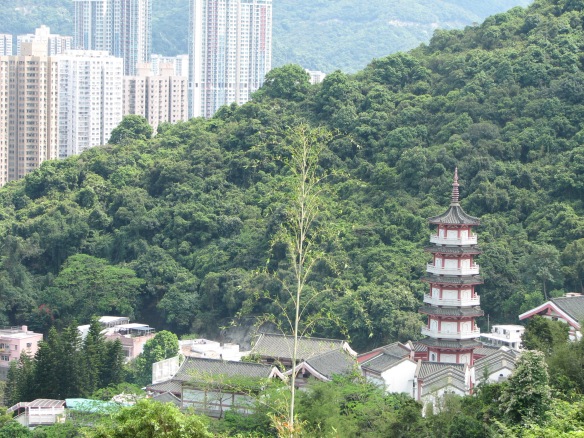 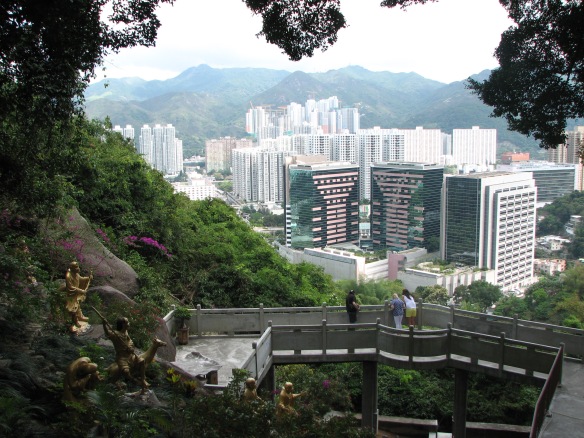 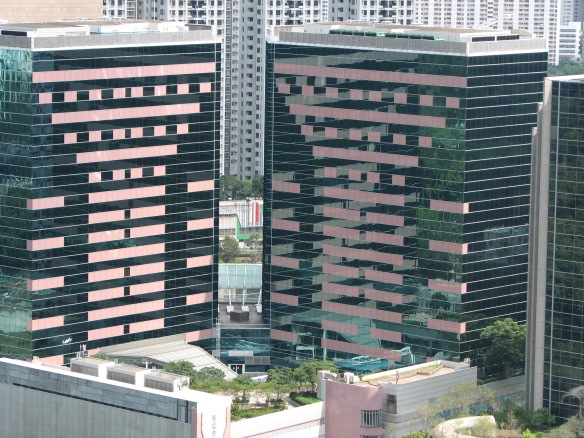 We climbed down a different set of steps past my least favorite creatures: wild monkeys. 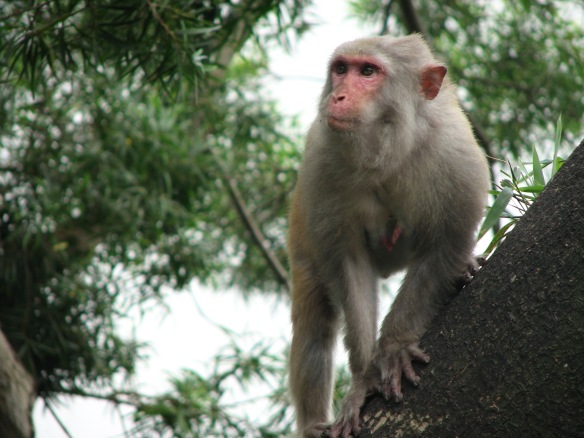 And from the meditative hillside of Ten Thousand Buddhas, we neared and then entered the shopping mall complex at Sha Tin. 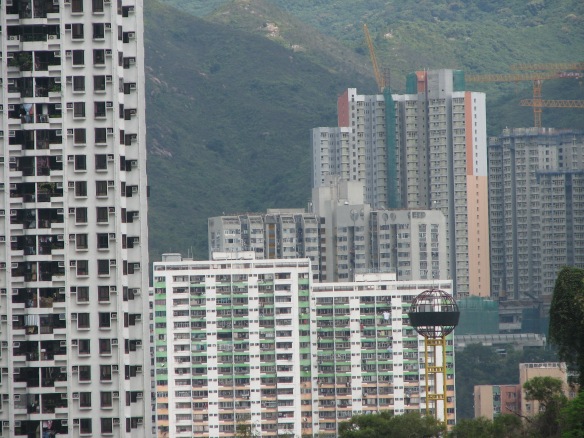 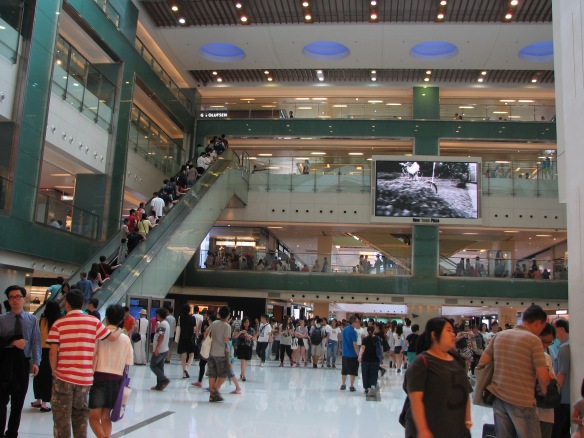 As I say, the New Territories has both the traditional and the modern. They all line the same path. 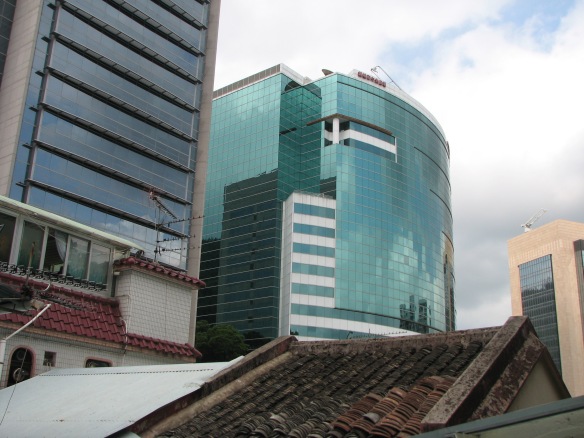 NOTES: [1] To quote Wikipedia, “…in Theravada Buddhism, an Arhat (Sanskrit: अर्हत् arhat; Pali: arahant; “one who is worthy”) is a “perfected person” who has attained nirvana. In other Buddhist traditions the term has also been used for people far advanced along the path of Enlightenment.”

[2] Taking pictures inside the temple is not allowed.

Photos Copyright © 2015 Jadi Campbell. All photographs can be enlarged by simply clicking on the images. Uwe’s photos of our earlier trips to Hong Kong and mainland China and his photography may be viewed at viewpics.de.

Beatrice: I had rather hear my dog bark at a crow, than a man swear he loves me. —Shakespeare, Much Ado About Nothing Act 1, Scene 1

Friends of mine live with a large, enthusiastic, energetic hound named Jessie. Picture a black dog with white paws and the unnerving golden eyes of a goat: that’s Jess.

She’s ten years old and her owners claim she’s slowed down. But Jessie still takes fences with an easy bound, even if her paws now touch the top railing rather than simply sailing right on over it.

When I visit, our time always includes a trip to the dog park. A dog with this much energy needs a lot of exercise. 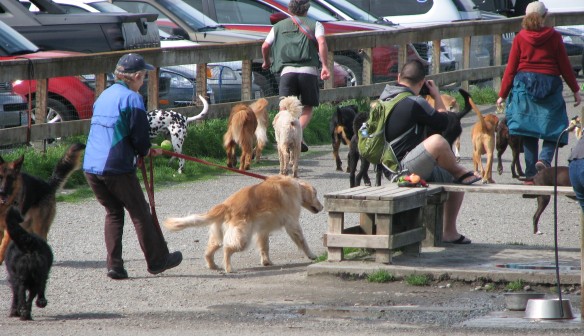 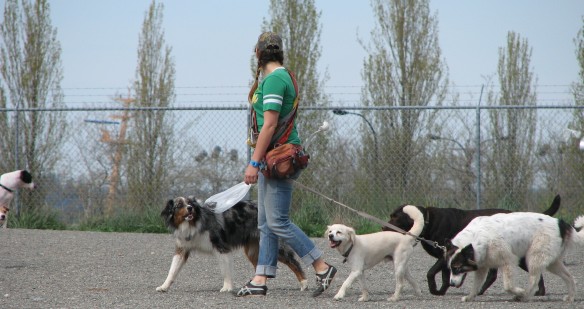 This is where good dogs go before they die. Located on the edge of Lake Washington in Seattle, the Warren G. Magnuson Park – Off Leash Area is property set aside for the use of canines. Once you’re inside the grounds, all the dogs are allowed off leash to run, play, chase balls, chase one another, and generally act like… dogs. 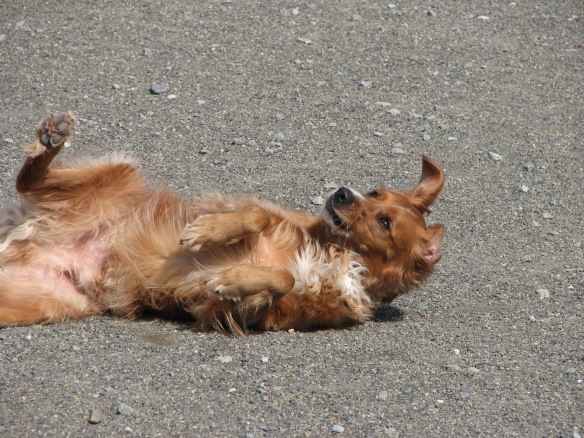 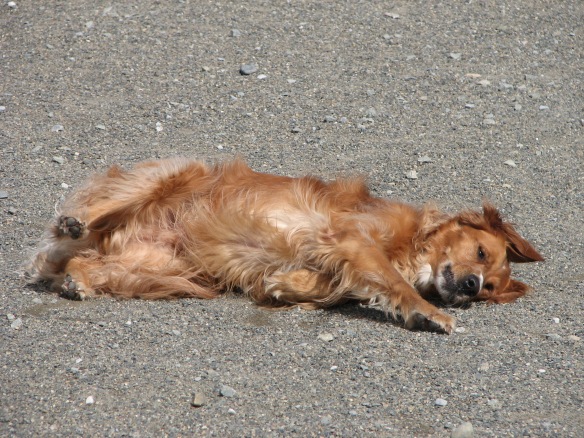 From the largest and meanest-looking to the smallest frou frou doggy, they love it here. The first time I visited I was amazed to see how well dogs can play with one another. Somehow they know: the park is theirs. The space belongs to them. There’s no territory to be defended or persons to be snarled for.

Instead of dog fights, the park is filled with the joyous barking of canines wanting to play. Magnuson Park includes an area for timid dogs (usually but not always littler dogs that are intimidated by the bands of boisterous bigger dogs) plus lots of play areas and trails. The park has a beach front area where dogs can go swimming, and even a place to wash off pets and get a gulp of water before leaving. 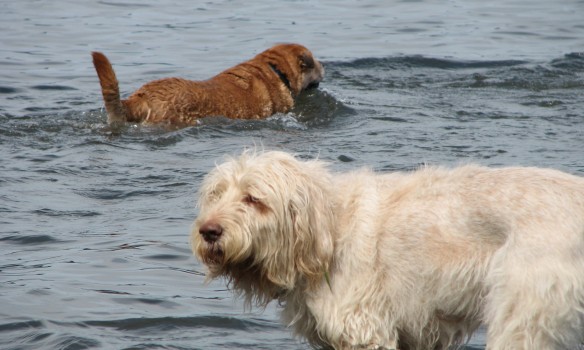 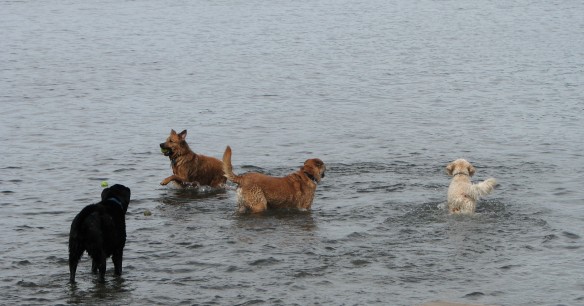 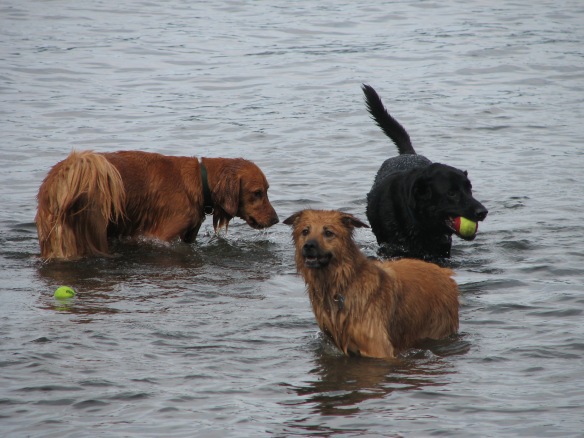 Brutus: I had rather be a dog, and bay the moon…
— Shakespeare, Julius Caesar, Act IV, Scene 4 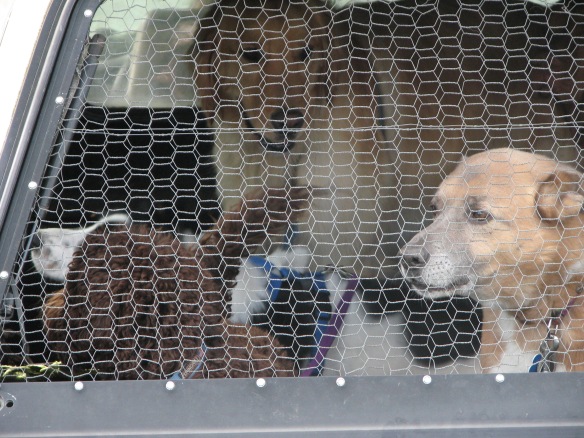 We can’t wait to get out of this stupid car