I seldom bake. Germany has the greatest bread on the planet[1]. France may have baguettes and croissants, but for sheer choice and variety nothing beats German baked goods.Why make something mediocre when there’s a bakery on every street corner?

As long as Uwe can recall, every week his mother made two cakes. It’s a German tradition, and women of a certain time period created great desserts that were works of art.

Before we visited, Mama always called to ask what kind of cake Uwe wanted. Sometimes I got to choose and I’d request Black Forest chocolate cake or a Bienenstich, a honey and slivered almonds cake that’s one of my favorites.

When it got to be late November, after each visit Mama Hartmann sent us home with tins full of Christmas cookies. She baked at least ten different kinds. Those cookies became cult. Friends would casually ask, “Have you gotten Christmas cookies from Uwe’s mom yet?” The idea was that I’d bring out a plate filled with said cookies for visitors to sample. “You tell your mother-in-law that these are damned fine cookies!” someone ordered happily.

Whether they had a thumb print of jam in the middle, or were layered with chocolate and ground nuts, or were perfect little crescents tasting of vanilla with a dusting of sugar, each cookie was delicious.

We came home with three tins of cookies that year.

The supply ran low really fast because our friends consumed all of them, rather than politely taking one or two. Uwe finally told me it had to stop. No more offering cookies to guests!

Mama’s days of baking are behind her. We’ve brought her to a nursing home in our village so we can see her more often. But in the last winter before she had to move, I wrote down the recipes and helped her make cookies. I imitated her steps for each one.

Well, what I baked bore little resemblance to the miniature works of confectionary art that my mother-in-law took out of the oven.

I discovered something. To bake like a professional takes years of making cakes. Preferably two a week, plus cookies every Christmastime. This last Christmas I knew Uwe would be missing his mother’s cookie tins. I was way too intimidated to try to bake Mama’s cookie recipes, so I came up with an acceptable alternative.

I baked one of the few cookies she didn’t: peanut butter with chocolate chips. They’re quintessentially American in their peanut butteriness and chocolate chips, and one cookie I can make and actually have turn out right. While it’s not a Mama Hartmann traditional recipe, it tastes like the holidays.

I like to think that maybe someday I’ll set out Christmas cookies for friends. But really you should try making Mama Hartmann’s Walnut Squares. With practice they’ll be perfect when the holidays roll around.

NOTES: [1] For variety and yumminess, bread from India is a very close second.

I just spent a few weeks visiting my sister and her family in Hong Kong. I was there in May, ahead of the rainy season. It’s already hot and humid, only a hint of the weather to come….

It can’t be a coincidence that this time of year is also the birthday of Tin Hau. [1, 2]

She’s the Goddess of the Seas, patron saint of sailors and fishermen throughout China and Southeast Asia. Her festival is always held on the twenty-third day of the third lunar month of the lunar calendar. This year her birthday fell on May 11th. My friend Weiyu flew over from Beijing, and we had the good luck to see a dragon parade. [3]

Lin Moniang (don’t forget that Chinese put the family name first) was born during the Song Dynasty on Meizhou Island in Fujian, China. Her dates are 23 March 960 – 4 October 987. She was the seventh daughter, an excellent swimmer, and wore a red dress. No matter how bad the weather was, Lin Moniang stood on the shore in that red dress in order to guide the fishing boats back home.

She was deified shortly after her death. There are many reports of miraculous sightings of Tin Hau by sailors in distress. Chinese who immigrated often built temples once they arrived overseas to thank her for the safe journey. Each year a major festival is held on her birthday.

One of the most spectacular is in Yuen Long in the New Territories. Weiyu and I headed out early to reach the town (an easy trip on the MTR, the wonderful regional transportation system). We left the metro station and immediately saw bright colors and a crowd of people. As we got closer, firecrackers began to go off! We’d arrived right on time!

The firecrackers exploded and confetti fell out and rained down!

This village had just begun to parade their dragon. They circled the lot a few times accompanied by a loud drum and cymbals. There was another loud bang, more firecrackers popped, and everyone followed the dragon as it headed into town. 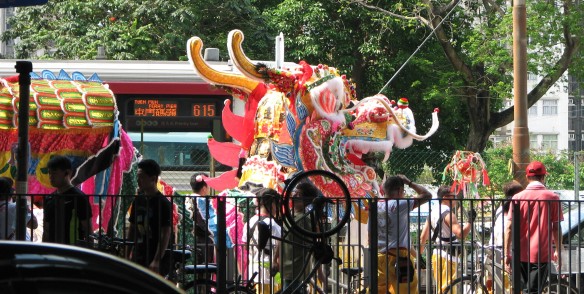 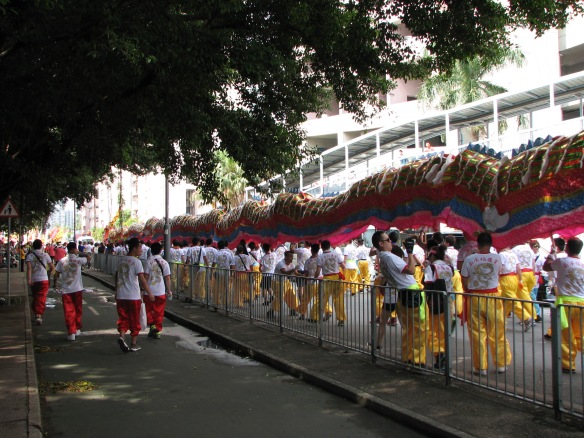 We arrived at another square where more dragons waited.

They took turns weaving up and down the main street, curling and snaking, rising and falling in an intricate dance. Sometimes two dragons danced at the same time.

People’s shirts indicated which village and dragon they were with. There were groups of old women waving fans, and children in costume, and lions. 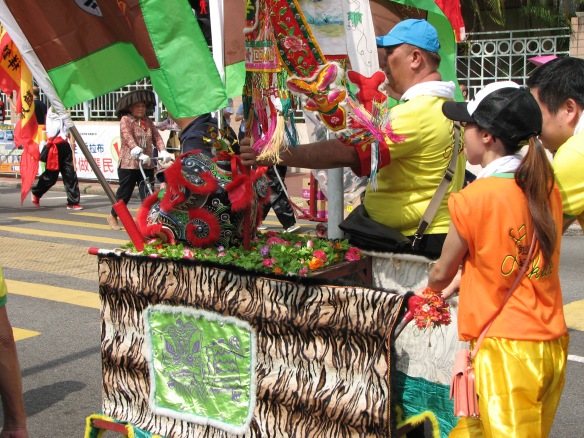 Can you see the dragon on the side in green? 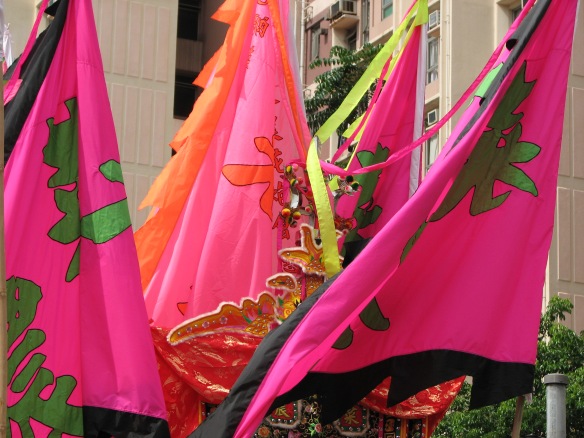 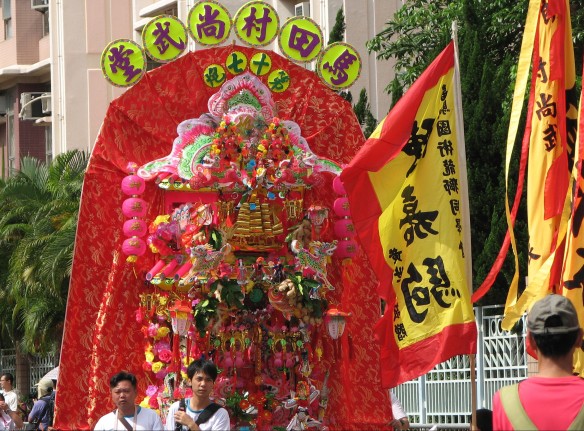 I recognized those instantly from the worship of Bà Chúa Xứ in southern Viet Nam. It can’t be a coincidence that her festival starts at the beginning of the rainy season on the twenty-third day of a lunar month too…

NOTES: [1] Tianhou (天后) literally means “Empress of Heaven”. [2] She’s also known as Mazu, Tian Fei or A-Ma. The Buddhists conflated her into a reincarnation of Guan Yin, Goddess of Compassion. [3] She has over 90 temples in Hong Kong alone. [4] http://en.wikipedia.org/wiki/Mazu

Photos Copyright © 2015 Jadi Campbell. All photographs can be enlarged by simply clicking on the image.

Go to my post The Cult of Bà Chúa Xứ to read about south Viet Nam’s most sacred shrine. More pictures from our trips to Vietnam and China and of Uwe’s photography may be viewed at viewpics.de.