On our first visit to Vietnam we booked a day trip to the Perfume Pagoda.* The Perfume Pagoda is a major Buddhist pilgrimage destination. The Huong Mountains contain fertility and agricultural cults, too.

The name Perfume Pagoda really refers to a number of shrines on – and in – the mountaintop. The most important temple is the Perfume Temple found inside Huong Tich Cave. It’s northern Viet Nam’s holiest site and the setting for the country’s most important and longest religious holiday.

The fest starts in the middle of the first lunar month (February 15) and runs from February to April. Hundreds of thousands of worshippers make the trek to present offerings at the mountain’s shrines and temples. At the high point of the festival, peak traffic will back up for as long as 8 hours on the Yen Vi River.

While the entire trip can be made by road, we took the water route. Reaching the site involved a two hour taxi ride to the pier located 70 km southwest of Hanoi in My Duc Town, a boat trip being rowed for two hours on the shallow Yen Vi River to the base of the pilgrimage site, and finally a two-hour hike up into the limestone Huong Mountains.

For the taxi ride we traveled with our guide on one of Viet Nam’s first highways. As you can see in Uwe’s photograph, the traffic on this main artery a decade ago was nothing like what we’re used to seeing in America and Europe. 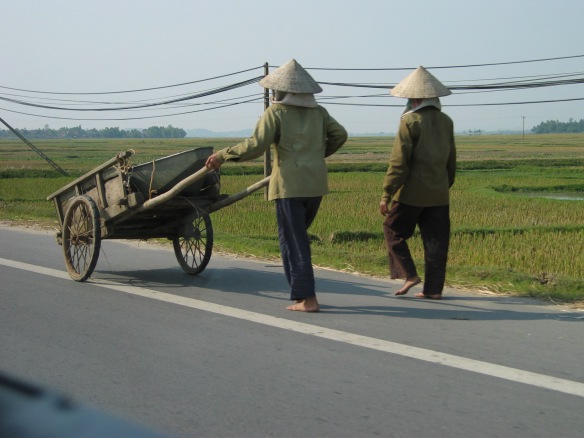 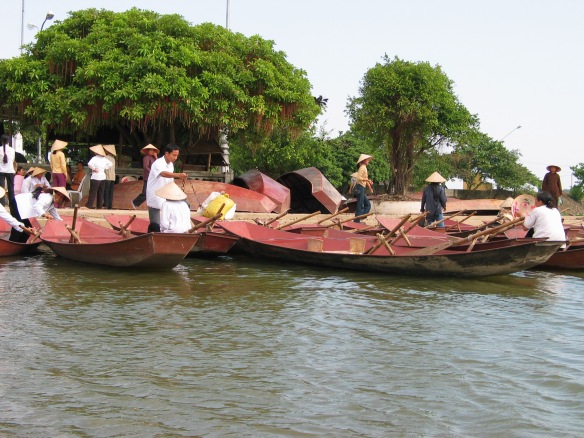 A young woman rowed us upriver. 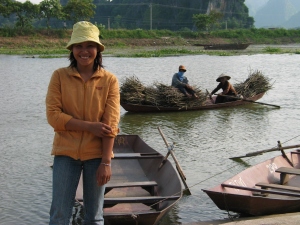 The boatwomen at Bến Đục (Duc Pier) make enough money to support their families, and are chosen by lottery.

We made our slow way past rice paddies and limestone peaks.

Fishermen in impossibly tiny boats balanced, standing, as they shocked the water with weak electricity to stun the fish they collected in the bottoms of their flat vessels. 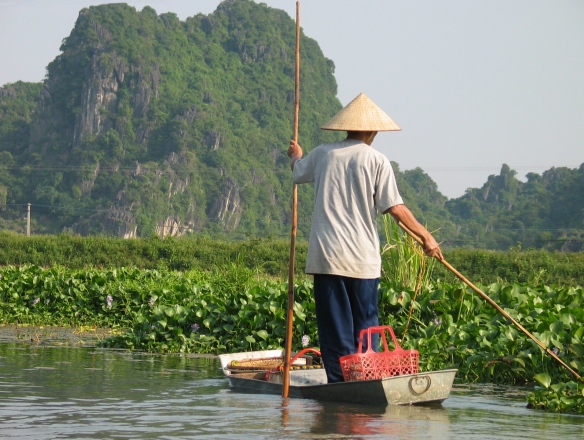 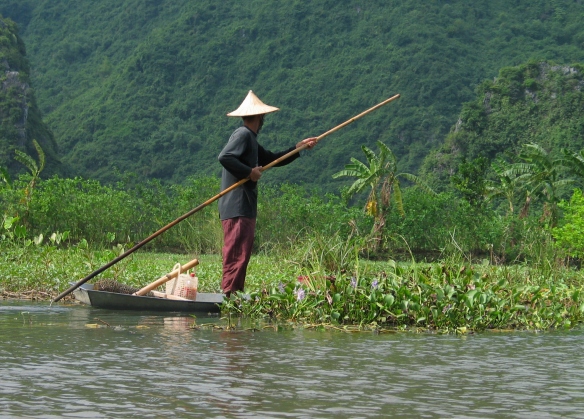 After disembarking we hiked 4 kilometers straight up.

Beginning the pilgrimage up the steps

Good shoes are needed as the path is steep in places and the stone stairs are slippery if it’s been raining! The landscape is lush, and the spectacular views are worth the strenuous hike.

Taking a break on the hike up the mountain

The Huong Mountains are rich in myths and legends. One story relates how a Buddhist monk came here to meditate in solitude two thousand years ago. Another legend tells the story of the Perfume Pagoda’s Quan Am or Guan Yin.** A stone at Phat Tich temple contains her preserved footprint.

It’s believed that the Buddha stopped at the Giai Oan temple to wash. Pilgrims clean their faces and hands in the Long Tuyen Well to wash away past karmas.

But older deities are present. Cua Vong shrine is where believers make offerings to the Goddess of the Mountains. And inside the holiest of holies, the cave’s stalactites are sought out for blessings.

Once we reached the cave, we descended back down 120 wide stone steps to the Huong Tich Grotto, which translates as ‘traces of fragrance’. 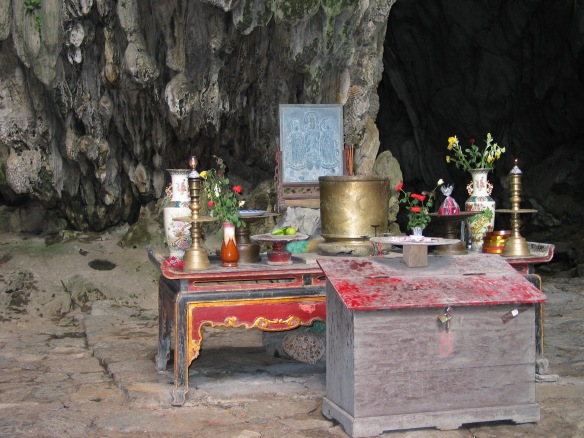 We entered the cave, whose opening is a dragon’s mouth. Inside Chua Trong (Inner Temple), our guide positioned himself underneath a stalactite and tried to catch a drop of moisture on his tongue.

Couples wishing for offspring gather under the Boy and Girl Stones; those wanting prosperity seek out drops from the stalactites hanging from the ceiling that grant abundance and wealth. The Perfume Pagoda Festival is considered an auspicious time and place to find a mate, and is the starting point for lots of successful romances.

At the time we visited, the remote northern region had just gotten electricity. And as our boat headed back down the Yen Vi we passed by boats bringing materials to build a new pier even further upriver.*** 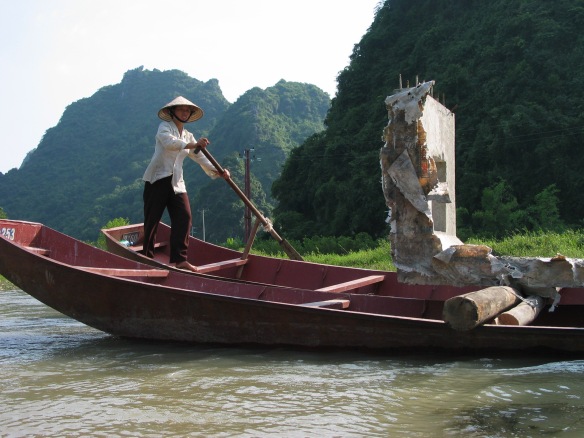 NOTES: *This excursion instantly became one of my favorite trips of all time.

**Guan Yin is the bodhisattva (usually female) associated with the quality of compassion. A bodhisattva is an enlightened being who delays Nirvana, staying behind to assist others in finding enlightenment. The Guan Yin of the Perfume Pagoda is identified with Dieu Thien, the third daughter of Dieu Trang, King of Huong Lam. She refused to marry, wishing to spend her time in prayer instead.

***An ingenious way to transport the needed materials to the site!

Go to my post The Cult of Bà Chúa Xứ to read about south Viet Nam’s most sacred shrine. More pictures from our trips to Vietnam and of Uwe’s photography may be viewed at viewpics.de.