Uwe and I visited both China and Japan on a trip. We were startled when Japan felt  much more foreign than China. For a First World country, Japan is opaque and surprisingly difficult to grasp.

We made sure we had plenty of time in Kyoto, traditionally Japan’s cultural heart.* Tokyo is modern and young and moves swiftly. Ancient Kyoto also seemed to have an older population, although the Kyoto train station was by far the most wonderfully futuristic we’ve ever visited. Our autumn visit coincided with the Jidai Matsuri, or Festival of Ages, held every year on October 22nd.

For a millennium Kyoto was the country’s capitol. In 1868 the emperor moved his imperial court to Tokyo. The Kyoto Prefecture was afraid that Kyoto’s thousand years of history would fade from memory. To make sure this didn’t happen they built the Heian Shrine to house the spirit of Emperor Kammu, who founded Kyoto in 794. The Jidai Gyoretsu, a parade for the Jidai Matsuri, was first staged in 1895.

Chairs are set up along the parade route and reserved well in advance. The parade  started at noon at the Imperial Palace. We positioned ourselves on the grass 4.5 kilometers away, not far from the giant red torii gates of the Heian Shrine where the parade would end.

The parade commemorates the continuous ages of Kyoto history with truly spectacular costumes and objects. It begins with participants dressed in the styles of the Meiji Era (1868-1912) and then goes back in time to the Heian Era (794-1185). Musicians and buskers, riders on horse back and flag carriers all march.

The outfits are accurate from the samurai warriors’ headdresses and armor down to the last dot of face make up. Every detail has been researched.** Over 2,000 people take part in the parade. 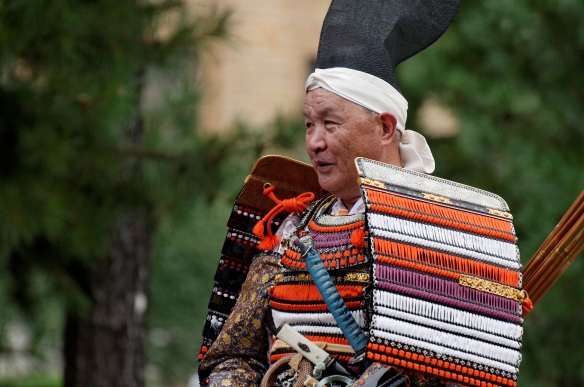 The procession lasted for hours and Uwe took hundreds of photographs. Occasionally I made a run for bottles of water and snacks. We fell in love with onigiri, an ingenious salmon and rice treat wrapped in seaweed. It comes in a deceptively simple looking package that holds all of the ingredients separate until you open it. 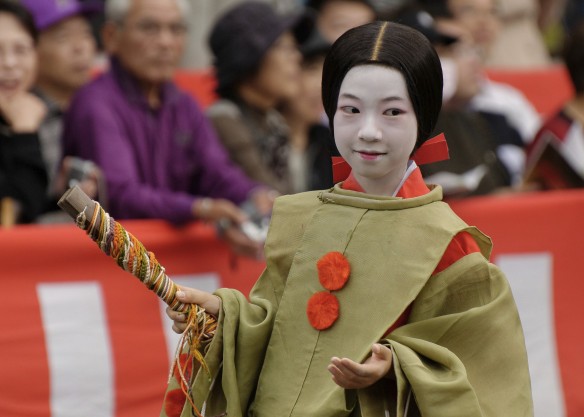 I’ll need a separate post to talk about the shrines and temples we visited and the geishas we saw. Or to describe the cloths and scarves I bought, each with its special weaving technique and materials. Or the lacquerware bowls I fell in love with, first developed by monks as the perfect receptacle for rice…

**The methods used to make the costumes are traditional, too.

Uwe’s photos of our trip to Japan and his photography may be viewed at viewpics.de. Go to my earlier post 8:15 A.M.to read more about our visit to Japan.