We’re in India for a few weeks and currently we’re riding in the back of an open jeep. We spent the better part of 5 hours each day on really bad roads to get here.

Now we’re layered in the few long-sleeved clothes we brought along. How cold can it be if you’re not way up north trekking in the Himalyas?

It’s shortly after 6 a.m. in the Bandhavgarh Tiger Reserve and we’ve been up since 5. “Remind me,” I beg. “What are we doing here?” I wrap the blanket the tiger lodge lent us tighter around my body. (What I really want is a sub zero temperatures sleeping bag.) “Remind me,” I ask again. “Why are we doing this?”

“You wanted to come back to India,” Uwe prompts.

“Oh, yeah. Now I remember.” And it’s true: I was really excited to return. I fell in love with the subcontinent when we visited a decade ago. In Goa we walked miles of pristine beaches. In Karnataka we attended an astonishing Nandi Purnima, the full moon festival, and Hampi was a bare landscape filled with gigantic boulders and ancient temples.

In a country this exotic and large, surely we’d experience something new when we came back. What I did not expect was that I’d be freezing my ass off.

We’re doing a mix of culture and nature. India is one of the two most populated countries on the planet, and we thought it would be smart to schedule some time in quieter areas too. I’m glad we did. The north central region of Madya Pradesh is green and varied and home to some of the few remaining wild Bengal tiger populations.

So for two days at Bandhavgarh and a day at Kanha National Park*, we haul our sorry butts out of bed at the crack of dawn, pull on all our clothes and drape ourselves in borrowed blankets. 6 a.m.-1 p.m. for the early safari; 3-6 p.m. for the afternoon attempt. If we’re lucky, we’ll spot a big cat.

Later we shed layers as the day warms up. The parks contain barking and spotted deer, 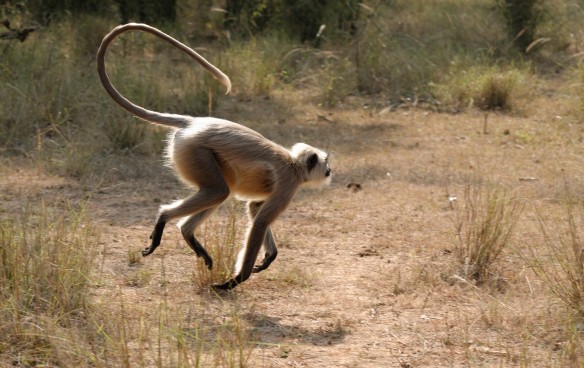 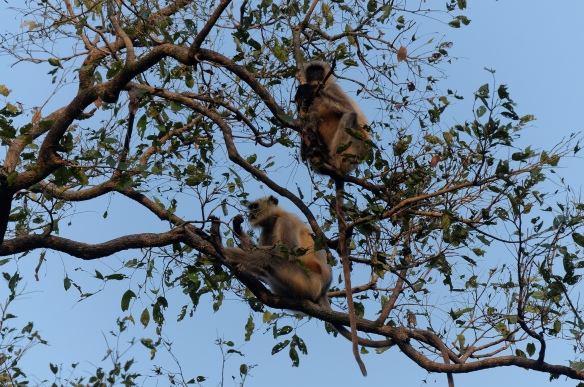 wild peacocks and other birdlife, 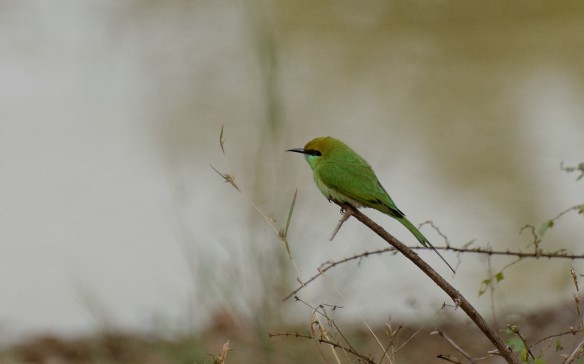 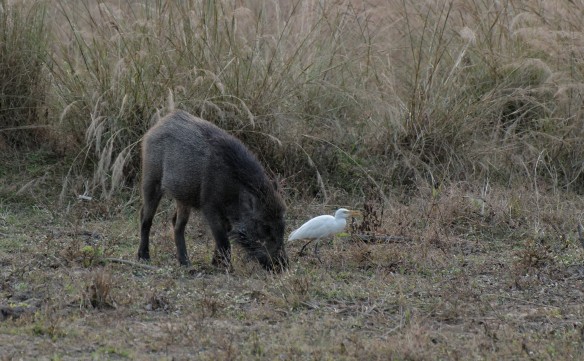 and a landscape filled with watering holes and high grasses, forest and farmers’ villages. On the second day at Bandhavgarh our jeep carries a park ranger to inspect a water buffalo kill from the night before. It occurred just outside the official boundary of the preserve and the farmer will be reimbursed for the animal the tiger took down. 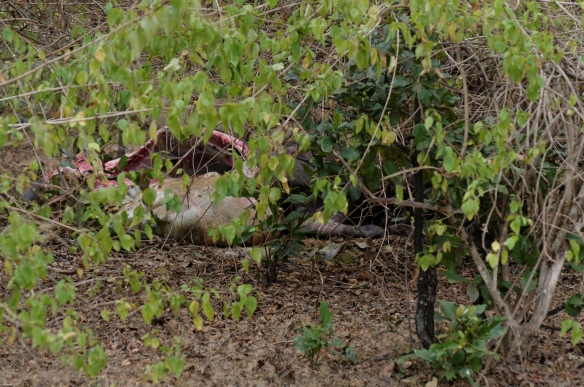 We aren’t allowed to leave the jeep – ever – and the ranger approaches the carcass very slowly.

Be sure you notice that the ranger’s got on lots of clothes too.

Where there’s a fresh kill, the big cat can’t be far.

I mean it: it’s really cold out.

By the third day I’ve perfected what I name the mummy wrap. I have myself wrapped so tight that I literally can’t move, but this way the blanket doesn’t unwind in the cold wind.

And, suddenly, a tiger leaps from the forest, followed by his mate. He moves into the reeds and returns dragging a dead spotted deer by the neck. 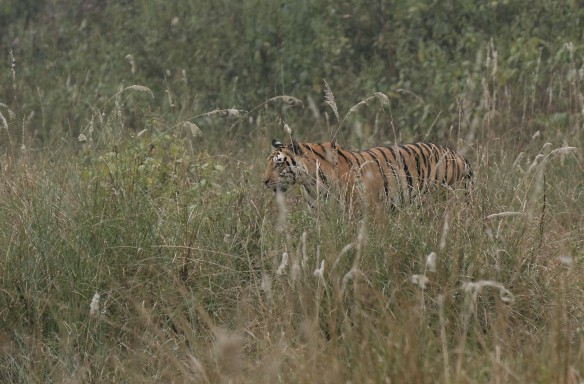 We see them for less than a minute and those seconds are absolutely worth the days of waiting. My God, they’re magnificent! During the afternoon safari we get lucky again: 10 seconds of spotting a shyer, rarer leopard. 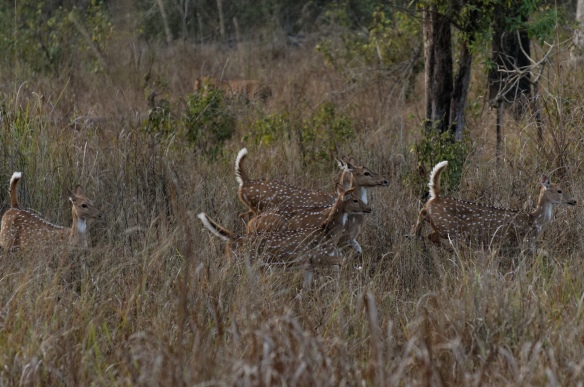 The leopard moved unconcerned in the back through the high grass

NOTES: *Kanha National Park provided the inspiration for Rudyard Kipling’s The Jungle Book. All photographs can be enlarged by simply clicking on the image. Go to my earlier post Travel Karma to read about our first visit to India. More pictures from India and of Uwe’s photography may be viewed at viewpics.de.